Victoria Park was opened by Provost Sir Andrew MacLean on 2 July 1887 to mark the Jubilee of Queen Victoria. The Queen gave her consent to the park being named in her honour.

The construction work was carried out in just two years, using labour from the shipyards during a time of depression. The total labour cost was just £4000. The land had been owned by Mr James Gordon Oswald of the Scotstoun Estate who feuded it to Partick Burgh in 1885 on advantagous terms, providing it was used for the wellbeing of the people.

You will find detailed information in the excellent heritage booklet published by Glasgow City Council but we have described some of the main features below. 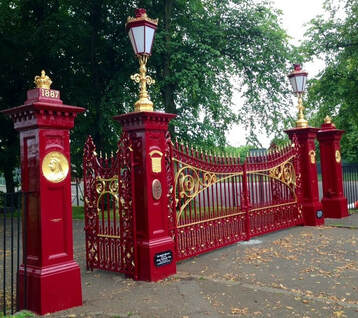 For the park opening the Ladies of Patrick Burgh raised funds totalling £200  for the splendid Jubilee Gates which were originally on Balshagray Avenue.  These had to be moved to the Victoria Park Drive North entrance when the approach roads for the Clyde Tunnel and Expressway were built in the 1960s.

The Gates were constructed by Messrs Walter McFarlane and Co at the Saracen Works in Possilpark and enabled horse drawn carriages to enter the park. World famous architect William Leiper was consulted about their design and it's known he submitted a design but we cannot be certain if that was the one that was used.

The outer gate pillars contain medallions with the words Queen's Jubilee on the cornice in the year '1887.' Above is a cushion on which rests a crown. Engraved on the shaft of the inner pillars are the Partick Burghs Arms with the motto Industria Ditat which means Industry Enriches. The gates include ornamental lamps.

​The gates were removed and fully reburbished a few years ago in a project supported by the Friends. 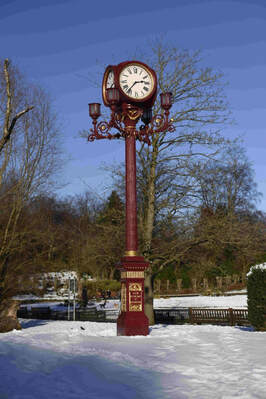 The Victoria Park clock is a well-crafted and rare example of a four-faced, freestanding public clock.  The Clock is adjacent to the small duck pond and was donated in 1888 by Mr Gordon Oswald and it is known locally as the Oswald Clock. The clock was constructed by Messrs Alexander and Son and is a Grade 'C' listed building.

Features of the clock include four plaques on the base:
Partick Burgh's Coat of Arms
Artistic floral details
Now is the day of salvation
Victoria reigns 1887

The Oswalds were an Episcopalian family who were deeply religious so the reference to the day of salvation is very much in keeping with their beliefs.

The clock was totally refurbished and reinstalled in 2015 and now works automatically although the original workings have been retained. Ongoing maintenance of the clock mechanism remains a issue for the Friends. 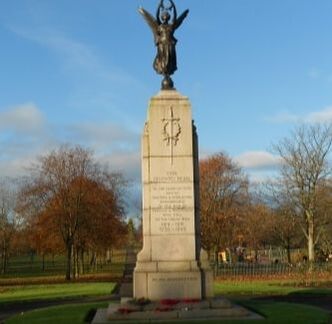 The magnificent Partick and Whiteinch War Memorial was erected in 1922 to commemorate all those who lost their lives in World War 1. The monument by sculptor Francis William Doyle Jones consists of a bronze female figure with outspread wings standing on a globe and holding out a wreath with both hands.

A symbol of Peace Crowning the Heroes, she is dresssed in an elaborate windswept chiton, the lower part of which flutters energetically behind.

The inscription on the cenotaph reads: Our /beloved dead/to the glory of God/and in/Grateful & everlasting/rememberance/ of the men of /Partick & Whiteinch/ who fell in the Great War 1914-1918 and 1939-1945.

The sculptor Francis Doyle Jones was from Yorkshire and graduated for the Royal School of Art South Kensington. Following the Great War he undertook a number of commissions for English War Memorials but we believe this is his only Scottish War Memorial and it bears many similarities with ones he produced for Brighouse, Yorkshire, Cockermouth  in Cumbria and the South African War Memorial in Saltwell Park, Gateshead.

The Friends are committed to holding a short ceremony of Remembrance at the Cenotaph each November. 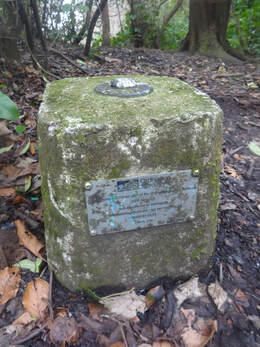 Hidden away behind the old crazy golf/amphitheatre in the trees near the fossil grove is one of the Ordnance Survey's fundamental trig points.

The pillar is 54.133 feet above Newlyn datum but the height plaque is missing.

In the rose garden there is a memorial to those who died on the SS Daphne, a 500-ton steamer ship that sank moments after her launching at a Govan shipyard in 1883. It was built by Alexander Stephen and Sons of Linthouse, Glasgow and the accident became known as the 'Linthouse Disaster'
More information in a 2015 article in the Scotsman