The Fossil Grove is one of the most famous in-situ Carboniferous forest examples in the world and it is one of Scotland’s most important Sites of Special Scientific Interest.
The condition of the building and the fossil trees is causing some concern and the Friends and the Fossil Grove Trust are working with the City Council to try and improve the humidity regime in the building and stabilise the fossils, as well as make the site more accessible and visible to the public. 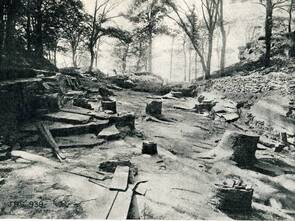 Victoria Park’s fossil trees were discovered in 1887 during the construction of the Park. The area had formerly been a whinstone (dolerite) quarry and on excavation of the quarry floor to create a path through the park, the fossilised tree stumps were discovered.

The authorities of the day thankfully chose to excavate the trees, shelter them from the weather and make them available for future generations to view, in what was one of the earliest acts of geoconservation.

There are eleven trees at the site, with the tallest stump reaching 68cm in height. Each is an internal mould, cast from sediment infilling the toughened bark that remained after the softer, inner plant tissue rotted following the trees’ death. When the trees were first discovered, carbonaceous material formed from the bark itself also existed, but this decomposed in the following years. The trees were lycopods (Lepidodendron) and exhibit both the base of the stem and the rooting system, Stigmaria. It’s thought they date from the Namurian Stage of the Carboniferous Period (approximately 325 – 315 million years ago).

The Fossil Grove Trust and plans for the future 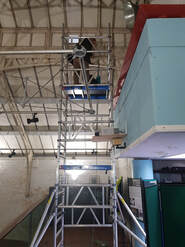 Investigations underway to specify ventilation improvements in the roof.
In recent years a number of proposals have been brought forward to replace or refurbish the Fossil Grove building and now the Fossil Grove Trust is now embarking on a phased approach to renovating the building along with grant funding from the Architectural Heritage Fund and Historic Environment Scotlnd.

The City Council - as owners of the site - are carrying out some necessary repairs to the security and electrical supply and the Trust have replaced the wall lighting, produced new interpreative material as well as opening some new vents in the roof to start the process of the humidity reduction which is needed to properly conserve the fossils for future generations.

The Trust is planning further ventilation improvement works which will be ongoing in early 2023 along with new drainage arrangements on the south side - again aimed at further reducing the intermnal humidity. Eventually the results of these works and their effect on the internal enviornment will feed into a new model for the building.